Take a look at the Seward Park peninsula today and imagine what the terrain across Andrews Bay looked like 120 years ago. The woods along the west side of Lake Washington between Hudson Street on the south and what is now the Stan Sayres Pits, and bounded by 42nd Avenue on the west, formed a triangular piece of land called Lakewood. Guy Phinney, a wealthy lumber mill owner, purchased and platted Lakewood in 1883. By 1903, the area was booming thanks largely to proximity to the Southern Railway which ran through neighboring Columbia City. It wasn’t long before the “clearings in the wilderness” were sold and pioneers from Canada, England, Sweden, Norway, and Iceland, as well as the U.S. Midwest began removing trees for their new homes.

Few Lakewood residents owned automobiles at the turn of the century,and walking or traveling by cart and horse over the hill to the city, especially at night, was less than desirable. Transportation issues spurred the organization of an improvement club. Canadian real estate broker Albert George Corbett presided over the first meeting of the male-only Lakewood Improvement Club in 1910; meanwhile Henrietta McCloy called to order the first meeting of 30 women, the Lakewood Civic Improvement Club. The groups met twice monthly; the women in the parlor of the McCloy home, and the men in a chicken coop and the Lakewood boathouse. Civic improvements included the installation of three plank sidewalks (instead of the standard two) to accommodate young families with baby carriages, the 48th Street overpass that crossed Genesee Street, and the grading of Genesee Street in 1912. A major success was the campaign to install a shuttle streetcar line for Lakewood residents — the Genesee streetcar named the “Galloping Goose” ran on a one- track line from Hudson along 50th to Genesee and Rainier Avenue and back again. 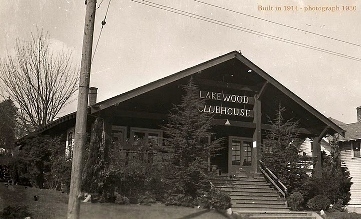 Civic improvements were just one aspect of the clubs’ goals. Having a social and meeting hall to host a variety of occasions was another. To that end, the “Lakewood Club House Company” sold $5.00 shares of stock to purchase land and building materials. With volunteer power from the Lakewood and Genesee Boat Club members, the first clubhouse in Seattle was built in 1914 on 50th and Angeline Street. In 1929, the name of the club changed to the Lakewood Community Club to include both the men’s and women’s groups. The mission statement “To unite all those whose homes and interests are in this vicinity and to work together for the development and common welfare of the community” still holds today. Seward Park neighbors joined this effort in 1979, consolidating the two neighborhoods of 6,700 residents, and the club name became the Lakewood Seward Park Community Club.

Over the past 100 years, the Club has served the welfare of its community. It has provided a meeting space for hundreds of organizations and events, including Scouts, Little League, Food Co-Op, and Candidates Night, as well as private groups. Regular events hosted by members, such as the monthly dances, the New Year’s Eve Ball, picnics, potlucks, bingo, bazaars, are remembered by many. In the past year, neighbors have secured the continuation of the Club for the next generation through a membership drive, the refurbishment of the clubhouse, and official adoption of not-for-profit 501(c)(3) status.